In my email today I received an opportunity to share my thoughts about Hands and Hearts history kits. Have you seen them? You can view these kits at www.handsandhearts.com
I have to tell you, I am going to get a coupon for doing this review.
Why do I want a coupon for something I have already used, anyway?
Because it was JUST THAT GOOD.
I have a daughter who would just love to do these crafts. She wasnt big enough to help before. And my middle son, who has done these in the past, will love to do the Early American kit again as we begin our study of US History this June.
Our family has used:
The Ancient Greece and Rome Kit
The Middle Ages Kit
The Early American Kit
The Western Expansion Kit
The Far East Kit
We generally have used one a year as we have studied different SonLight cores. These really added the hands on that SL lacks. Its hard to pick one favorite. But if pressed, maybe it would be the Early American kit. I have a few favorite activities from the other kits as well.
Hands and Hearts does such a great job choosing doable activities for a wide range of ages and abilities in these kits. One of the simple and enjoyable projects from Early American History was the pomander. So simple, easy and kept little fingers busy and happy. Also kept the closet smelling nice! 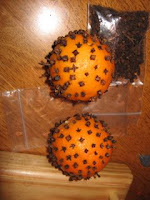 Another great activity (this one from the Western Expansion kit) was the leather pouch. The pouch was pre punched to be sewn by little fingers. Every necessary supply was included. It was a great activity for building motor skills in a kindergartener and a darn useful pouch when it was finished. 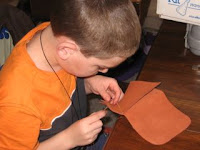 Though we made this several years ago, my sons are still using these for odds and ends around the house- like marbles, nerf darts and the like!
I also want to mention the all time most amazing project of all, from the Eastern Hemisphere kit- Gyotaku. I wish I had pictures of this amazing activity. Hands and Hearts supplied us with a dead fish. We painted carefully onto the fish and pressed the fish to a piece of delicate paper. The imprint of the fish was left on the page and it was amazing. This traditional Japanese way to make a trophy of your fish was probably the coolest art project my kids had ever encountered. Though one of my boys was completely grossed out initially, he soon realised the fish wasn't going to be hard to handle or particularly stinky. I have framed these. They are that cool.
When we purchased the Ancients kit it was available with a Roman Coin. Though this sounded spectacular to me, we all gave up on cleaning it before the desired results were acchieved. Because my children were 7 and 4 when they did this kit, their greek vases were probably not the most amazing creations either. But they had a lot of fun, learnt to recognize the forms of greek pottery (or at least to acknowledge there were forms) and enjoyed painting something. The reliefs they made from plaster of paris are still displayed on our shelf though!
From the Western Expansion Kit, panning for gold was an extra for the additional student which I was glad I had invested in. This was one which kids can do for hours on a nice day outside.
I can not believe how many projects we have done over the years with these kits! I have two boys and I always bought the Aditional Student kit. I'd realy recommend that option in addition to the basic kit so that children each have their own keepsakes from your studies
. Without Hands and Hearts I have a nasty feeling we would not have accomplished half so much. it seems that despite my best efforts, when I try to plan a craft I forget some essential at the store. With Hands and Hearts History Kits this is not a problem because the Estes' family packs in everything you need, down to paper towels.
This business has blessed our homeschool. I can not recommend these kits enough!
Please visit Hands and Hearts.
If you use this link, you will get 15% off your purchase!
Posted by Sarah at 6:05 PM 37 comments:

That is so nice of her. I wish I still blogged too, occassionally, but it seems like a dangerous pastime. What if I say the wrong thing? My mother told me to never write anything you do not want the whole world to see.
Here's the low down on a year with no blogging.
1. got a puppy. a mutt. she is now 55-60 lbs. we feed her food that is not recommended by the dog food nazis. she doesnt even mind.
2. did SL core 5 only we didnt really do what they said because it was weird, yo. Who studies other cultures by reading about missionaries who basically attempt to obliterate a major facet of these cultures? We read a million books and watched a billion movies. See here:
http://docs.google.com/Doc?id=dc97tp5n_0cmzcj7cs&hl=en
3. were genetically and otherwise sound.
4. went to Niagara Falls. Went to Baseball Hall of Fame (ok, I didnt go to the Hall of Fame. The boys did. Bee and me went to a Farming Museum and had a girly lunch. )
5. continued to eschew capital letters and punctuation out of sheer laziness.
6. lost the neighbor I never thought I'd like when they moved to CA. miss them terribly. giant hole in life now.
Upcoming in 2010:
1. brother will be released from prison in May. very exciting for everyone who loves him. We know he can go on to become what he could have been before his poor choices ended him in prison.
2. Kalahari waterpark in february. Unschooler convention. Im not actually an unschooler. Pray for me.
3. indoor soccer and wrestling starting soon.
4. my other wonderful neighbor also moving to CA. I hate her. No, I love her. She and I laugh a lot together. I need that so badly.
5. starting SL core 6 on Jan 11 after one week of studing "prehistory" which is a sort of stupid name for it because its still history even if its before the other stuff, right?
ok fern. there you have it. a blog. a laugh riot, no?!
This is why I quit blogging I think: I even bore myself.
Posted by Sarah at 1:53 PM 1 comment:

TWO things I must clear up

"Jesus had other brothers and sisters."

I see you are laboring under the protestant delusion that Mary was a normal wife and mother. Dear me.

This isnt a point I even care about actually, but since im a catholic Im supposed to? I guess?

Anyway just to clear that up, no. Mary is ever virgin. Brothers and sisters are actually cousins. Its that convoluted old timey extended family family stuff.

And then, the next thing I feel like I must address is this:

I have never. Not Once. Ever. In my whole life. Texted.

I know. Its so lame of me. But I dont have that in my plan and Im not sure my phone (which doesnt even have a camera...so lame) can text.

But if I could text you, I would text MANY snarky things. 16 hours worth of snark. near constant snark. and it would ALL be hilarious and witty. Rest assured.
Posted by Sarah at 8:48 AM 1 comment:

As it turns out Im just not that into you, blogworld. I dont really read them and I apparently do not write them either!

None the less, in the interest of getting a few things off my chest, here goes.

1. I want a Havanese dog. I never knew I would like these tiny pocket sized creatures but we do. they are tiny and non shedding and they think they are real dogs. But they are 10 lbs of fluff. The children really want one called Harry who lives in OH. Its a problem.

2. Its a problem because Harry is a puppy and we are travelling at Christmas, otherwise Harry would be ours. sigh

3. 16 hrs in the car with my husband sounds like a version of Hell Dante didnt even conceive of.

4. Im so so sick. Its only been a week, so I feel as if Im a major whiner for even mentioning. My friend has been sick since September after all. She needs pity WAY more than I. But I pity me too.

5. I need to go to the grocery store. Can you even imagine what that will be like? CURSES!
Posted by Sarah at 6:44 AM 1 comment:

Oh yes we did!

4 things, which matter to no one but me

1. My new iPod arrives Friday. My nights are so cold and lonely without my audio book.

2. My daughter is being referred to a geneticist. First the stubby fingers, second the leg length discrepancy (which possibly caused the ginormous cyst behind he knee?) and third the possible enamel issue with her teeth. My daughter and my second son are so similar, physically. Their little bodies are nearly identical: same big ribcage and narrow waist, same weird chicken bones when their arms are raised, same oddly situated legs, flat feet and same large head. Very different from my eldest, with his straight slim build and lovely legs and feet. I'm making them sound so attractive. Really, 2/3 of my kids look a little like aliens. I first noticed it with the second boy when he was an infant. He just didnt look too bright to me, to be frank. And then the girl came along and people said how pretty she was and how nice her coloring was and I thought, hmmmm. Maybe... Of course, both are lovely looking now. For aliens.

3. The football team lost tonight, ending a great season. I have never been prouder of my son. He was a real trooper. He met his goals that he set at the beginning of the season and the coach informed me he is one of the most improved players. He never missed a game or a practice. He was captain tonight and called the coin toss, too. Though I had thought we'd hear a ton of complaining about the grueling sport, in fact he loved it. He has set a goal of playing first team next year. I'm setting a goal of learning what the hell is going on out there.

4. If this election doesn't come soon Im going to need a rubber room and an IV with narcotics in it. I have a feeling I'm not alone.
Posted by Sarah at 7:10 PM 1 comment:

For two years I have been relying on my iPod to banish my insomnia.

140 dollar 30 gig refurb photo, how I long for you.
I am not yet finished with the Wordy Shipmates.
I hear Sarah Vowell calling my name in her slightly lisping nasal twang.
Posted by Sarah at 8:30 PM 6 comments:

Sarah
Scandalizing the faithful since 2005